Yimayngurr is an ill-born child of the Rripangu clan, one of a number of hunting and gathering clans comprising a small, tribal human society on the isle of Kythira. He was sired by an orcish pirate who raped a Rripangu clanswoman during a provisions-gathering raid on their coastal camp.

Raised by the Rripangu clan among the Kythirian mangroves, Yimayngurr was initiated into the spiritual law of his people, dancing in ceremonies honoring Marrpan, the Great Sleeping Turtle, on whose back his people believe the isle of Kythira resides. Yimayngurr was a precocious youth, demonstrating a spear-hunting ability far beyond that of his peers, no doubt enhanced by his orcish physique. His ability to consistently bring back the largest, healthiest game from every hunt, quickly earned him the respect of his peers, despite their suspicions about his inauspicious birth, and mixed blood.

Very much at home amongst his clansmen, Rripangu’s greatest ambition as a child was to learn the songs, dances, and stories of his people, and grow up to become a law man, one of the Rripangu leaders and keepers of history, ancestry, and secrets. He was taken in early on by Botj, one of the law men who acted as Yimayngurr’s surrogate father, teaching him the arts of tracking, stealth, and bush medicine. This idyllic scene was shattered however at the end of his 16th year, when Dhakanmirr, one of the oldest and most conservative law men, blamed that year’s severe drought and lack of game and forage on the bad luck brought about by having a half-orc with “dirty blood” amongst the people.

After the council of law men convened, even his mentor Botj agreed that Yimayngurr was to be banished from the tribe, and put to sea, in order to appease the ancestors angered at the violation of the tribe’s strict marriage and procreative taboos that Yimayngurr’s birth represented. During the farewell ceremony prior to Yimayngurr’s banishment, he was granted a vision by Wititj, the World Serpent, foreshadowing the decimation of his people and the land they have held since time immemorial by a ravenous horde of undead and shadow-dwellers serving a dark and mysterious force rising from the depths of the Shifting Seas. Along with the vision came a gut feeling that his brutish orc father, whom he has never known, might hold the key to or at least a piece of the vision's puzzle.

Yimayngurr deeply wishes to return to and protect his clan, but knows that unless he can provide proof of the impending danger and a means of stopping or avoiding it, there is no chance he will be taken back. He has vowed to find the truth behind his vision, starting with locating and confronting his father. He knows too that he cannot accomplish this task without the help of skilled allies. It is for that reason that he has turned his canoe toward Daunton, a land where it is rumored great adventurers make their homes and their heroic reputations. Perhaps he can find the help he needs there. 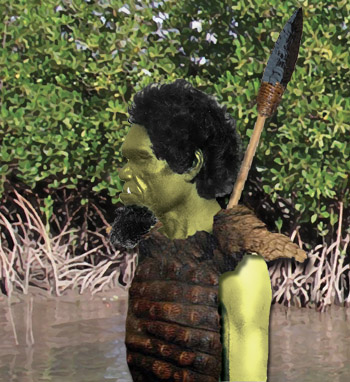 Curly-haired with a broad, flat nose, Yimayngurr bears many of the features of his Kythira-based human tribesmen. Certain telltale features indicate his mixed parentage though, such as his prominent lower canines, greenish skin tone, and unusually tall stature. Lines of pain and worry have recently been etched in the young man's forehead, following his banishment from his native Rripangu clan.

Following the traditions of his people, Yimayngurr has no use for clothing, save for the kind that protects you from getting killed. He has recently eschewed the crocodile-skin leather armor of his people in favor of the more robust Dauntonian hide armor. Yimayngurr also wears the thin, loin-cloth-like belt made from his mother's hair, which all Rripangu clansmen wear outside their armor as a reminder of his homeland. Like every Rripangu hunter, he carries his armory strapped to his back. Having found a remarkable magical longspear that returns to his hand when thrown in his latest crypt-delving adventure, he now uses it as his primary weapon in place of the traditional fighting spear of his people. He also carries a Rripangu-style three-pronged fishing spear, but will only use this in combat as a last resort. Other than his trusted spears, Yimayngurr carries nothing but the hunter's bare essentials: tools for hunting both on land and water, special body paints and footpads that allow him to remain hidden from his prey, and fire-making and cleaning tools with which to dress and cook his kills.

Yimayngurr speaks with an unusual accent, common among those of his people from Kythira who speak Allarian (something akin to an Ocker, or low brow Aussie accent). He fancies himself something of a naturalist, collecting trophies from the exotic fauna he encounters, and imparting useful tidbits of biology to his companions whenever he gets a chance.

A general affability and a penchant for occasional silly, physical humor usually mask the hurt that Yimayngurr carries deep inside. Those who push him too far though, may see a very different side of the amiable half-orc, as he taps in to that hurt, triggering the deep-seated rage he feels over having been born a bastard and exiled from his people.

Alignment: Unaligned
Despite having been exiled, Yimayngurr follows the sacred laws of his people, which hold the protection of their traditional lands, ancestral heritage, and religious secrets to be more important than any greater philosophical or cosmological moral concerns. Yimayngurr is a loyal friend, but being desperate to rejoin and protect his people, he may consider acts he would have thought deplorable in the past as a means to that end.

Adventuring Companions Past and PresentEdit

Call me blind, but I can't find anything wrong here. Only one more approval to go. Judges, Please review Yimayngurr Cheers, HMG

Approval from renau1g
*Might want to update your MBA to the magic longspear so +7 vs AC & 1d6+5 damage same for RBA.
*Precise Assault - you should be at +9 to hit and make a note about the +10 if you utilize running attack.
*Can you use the magic weapon for your Sure Shot Daily? Seems like you could as it can thrown as a heavy thrown weapon.

Retrieved from "https://l4w.fandom.com/wiki/PC:Yimayngurr_(pacdidj)_RETIRED?oldid=12591"
Community content is available under CC-BY-SA unless otherwise noted.