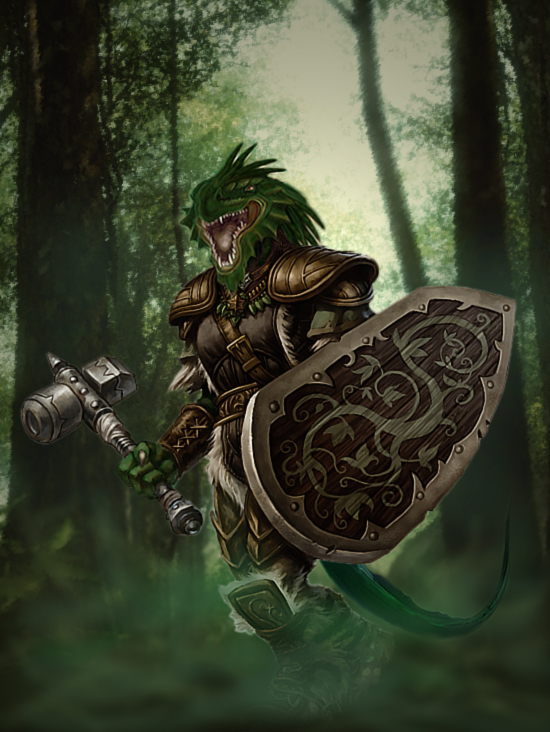 "I remember little of my homeland, except that my parents had sent me away at a young age due to prejudices of my kind, based on differences between myself and other dragonborn. Most notably, my colorations are more akin to our Dragon progenitors and that I possess a tail. The journey by ship was arduous as I became extremely ill... the rocking motion of a boat does not suit my nature... however, on solid ground and amongst the storms, I am quite at home. Perhaps it is because dragons are almost a force of nature themselves, that I feel so at home channeling the wrath of nature itself. Perhaps it is not. I do know one thing, however.

Anything that seeks to harm my compatriots will face a reckoning... the wrath of the world itself, the fury of the storm!"

Occupation - Dragon Totem Warrior: (From Primal Power) In the way that some barbarians adopt totem animals that embody the qualities they aspire to, you look to the qualities of drakes and dragons as a model for your own ferocity. You might come from a tribe ofdragonborn that serves a living dragon ruler, or perhaps you venerate a long·dead dragon spirit that once ruled your ancestors. Gray dragons and cobalt dragons are the most common totem dragons for dragonborn characters, because they are the most rapacious hunters among dragonkind.
Background Benefit: +2 to Endurance

NOTE:The +3 Class bonus to AC is from Rujah's Guardian Might (Stormheart) class feature, since this template will not calculate his Con Mod as the attribute for AC.

Taking advantage of the "redo" rules that allows you to well...redo all of your mechanics one time before (or as) you get to level 2, I have had Crag switch out a couple of powers that I thought weren't working for him. Here are my changes:

Retrieved from "https://l4w.fandom.com/wiki/PC:Rujah_Neth(Theroc)?oldid=12154"
Community content is available under CC-BY-SA unless otherwise noted.