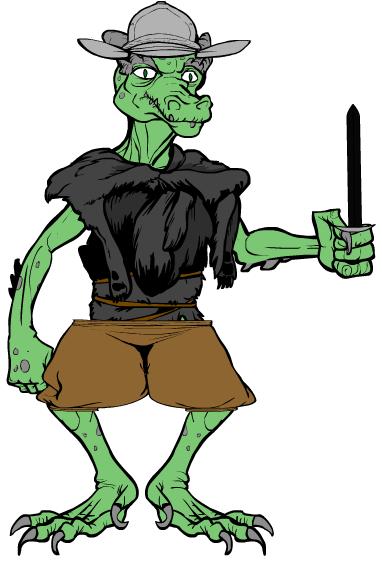 Appearance and Personality
Age: 15
Gender: Male
Height: 3' 7"
Weight: 64 LBs
Alignment: Unaligned
Jax's scales are colored lightly green and possess a hard, metallic tint. His eyes are of a much deeper emerald green, and his horns are a typical gray color. Jax's hands are scarred in several places, although the old injuries may not be readily apparent to non-reptilian eyes. As a cold-blooded creature, Jax has some (by human standards) peculiar habits, such as sleeping on hot rocks and eating whenever he feels groggy.

Ancient lore sometimes holds that dragons are the ancestors of kobolds. If true, that may be why Jax often dreams of sleeping on a pile of gold and jewels. The young kobold is very materialistic, often obsessing over how he can "acquire" a new bauble or trinket. However, even if he inherited greediness from his ancestors, he certainly did not receive their bravery. He is frightened very easily and is terrified that one of the larger softskins (as he calls non-kobolds) will snatch him up and eat him. As a result of a childhood spent running from shadows, Jax is extremely agile (although twitchy might be a better word). When he does find someone he trusts, he is friendly enough and quick to suggest partnerships in whatever scheme he is working on, happy to have someone bigger to protect him.

Background
Both Jax's close and extended family work together to run one of the premier trapsmithing businesses in Bacarte, The Kobold's Stinger. Jax himself, however, does not partake in the family business. He grew up valuing his indepence, and as such he spent more time in the streets and sewers of Bacarte "exploring" than he did at home. He did pick up many lockpicking and trap disabling tricks from his parents, but he put them to work for unscrupulous purposes - swiping whatever shiny or valuable objects he could.

Jax's compulsion for thievery led him into trouble very often, and he racked up hefty fines from angry marks and law enforcement. His parents footed the bill for years, but eventually they had enough and "politely suggested" that Jax live on his own. He found that there were only two real changes to his life from being cut off: he had to find a new bed (usually in alleyways), and he could not let himself be caught in the act so often. With that in mind, he decided to try putting his skills to work for a legal job: adventuring. After all, stealing is alright if the victims are outlaws themselves! Jax now frequents taverns and tries to memorize wanted posters, still dreaming of the day when he can den on top of a mountain of treasure.

Items are generally listed from most desired to least.

Retrieved from "https://l4w.fandom.com/wiki/PC:Jax_(Dekana)?oldid=25616"
Community content is available under CC-BY-SA unless otherwise noted.