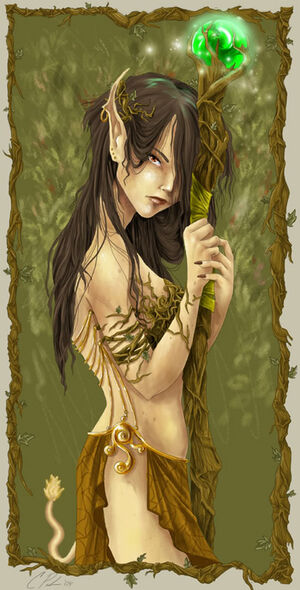 A very young elven girl with a cold glare. She is short and not physically imposing, but the spellbook at her side serves as a warning against taking her lightly. She has long black hair and wears skimpy clothes.

Background
Until recently, Eva was a normal girl in a Kythiran village; carefree and flighty, as is relatively common in the fae-descended folk. However, her home was particularly close to the shadowrift. Its dark influence flowed through the village, and Eva began to exhibit prowess in the arcane - not in the usual enchantments, which would certainly be welcomed, but in foul necromantic powers. Eva found her magic entirely fascinating, and she would not give it up no matter how hard her kin tried to convince her to. She quickly found herself banished from her home.

Soon thereafter, Eva wandered off the isle and took the short boat ride to Daunton. Her current flight of fancy takes her to the Hanged man, where she looks for a way to prove to her kin that she is not evil or crazy.

She seems wholly unaware of the danger her magic poses - not to her enemies, but to herself...

Everything looks in order to me.

I believe a mage gets their starting spellbook for free just like an arcanist does, so I'm not sure you need to pay for it. Even if you don't it's minor enough to not preclude approval.

Dekana: Thanks, I wasn't sure if mages were different. I'll refund the 50gp.

Retrieved from "https://l4w.fandom.com/wiki/PC:Eva_(Dekana)?oldid=26583"
Community content is available under CC-BY-SA unless otherwise noted.