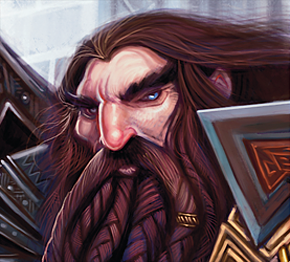 Dane Thoradin came from a rich merchant's house Mykonos' Sanctuary. He grew up enjoying the finer aspects in life and at such a young age understood the true value of gold. He did not do well in general studies and his tutor scolded him for not living up to his potential. His father always laugh after Dane's tutor stormed off in a fury knowing that books did not lie in his son's future.

Dane had two older sisters and one younger brother. They played and grew together as expected for dwarves of their station. It was their mother who stood out from the rest. She was the youngest of another merchant house married more for political reason then for love. While there was a mutual respect by all members of the family, the mother remained distant.

It was a single night that altered the paths of the Thoradin clan. Dane's father was out late due to business. When he returned, he was greeted by only one crying child. Dane held his father's bloodied axe mumbling for forgiviness. Dane tried to explain what he saw and what he had to do but the sight of his father only made things worse. His father could only take in that his children have been slain in their beds while his deceased wife laid at Dane's feet. To this day, it is not known as to why Dane's mother killed her babes while they slept. Nor is it known what Dane saw in his mother's eyes knowing that not "everything will be OK." It is only known that this day, Dane and his father fled their previous lives and that House of Thoradin fell.

Age: 56
Gender: Male
Height: 4'3"
Weight: 174 lb.
Alignment: Good
Personality: Dane is a good natured soul who has a neutral outlook on life. He values his family just as much as his gold. His education was cut short early in life but he made up for it with physical prowless by having to restart his life within the wild. Dane likes protect the little guy and feariously defends his friends & family in either verbal or physical combat. Most of Dane's ambisions have left him, he's just a dwarf trying to do the right things and a little coin doesn't hurt. Apperance: Dane's current adventuring gear include scale mail and a heavy shield. These are mostly accented with different shades of brown, Dane's favorite color. His only weapon is a waraxe which he wields as effortlessly as his own right arm.

Mykonos Sanctuary[1] - +1 endurance checks, reflecting the toughness they developed working as slaves in the mines over their year of torment; the constant psychic bombardments suffered by the survivors has also granted them a degree of resilience, in times of extreme exertion they can sometimes shake off debilitating mental effects. When a player character from Mykonos' Sanctuary spends an action point they may immediately make one save against a any effect with the psychic keyword that a save could end.

The Sibylline Idol Dane was hired on to search down a mysterious "Sibylline Idol" for a mystical Sage. This idol had unholy powers which drew unseele creatures to it and slowly took over the minds of those who are in retain it. The party Dane joined with was able to obtain the Idol from a gang of Wererats and destroy it and outer-world portal that laid under the city. In the end, Dane was right about this being a "rat smashing job," and was able to surive the day to get a hot meal with his hard earned coin. His companions were: Incarnation - warforged warlock, Riardon d'Cealis - eladrin warlord, Rurdev - shifter ranger, & Vashik One Eye - human wizard.

A Night at the Opera Dane was hired by a mysterious man by the name of Afred to find his missing warforge companion, Grabbag, from the The Dauntonian Fine House of Oration. He during his search, he was waylaid by members of the Gearhouse Gang as well as a mysterious motes and a cyborg goblin. Upon returning the Grabbag to his friend, Dane and his companions were caught in a crossfire between Northtown Knicks and the wererat gang that he dealt with before. The wererats were defeated and peace was maintained between the party and the Knicks. On a side note, Dane and his allies were hired by a Captain Coppernail to protect the Opera from any misdealings. There the Lady of the Winds performed and an attempted kidnaping occured when the strange motes reappeared and the statue feature pieces of the opera came to life. Dane took on the statues primarly which almost got him killed. In the end, the enemies were overcame and the crowd rejoyced. The Screamer Companions: Incarnation - warforge warlock, Rurdev - shifter ranger, Qynn d'Cealis - eladrin psuedo-fighter, Hadrak - dwarven cleric.

05/06/09: Edited to update XP and to correct Endurance modifier. I forgot to add my background bonus.

Removed comments from Dunamin that have been fixed.

1. The skill numbers in the Math section are correct, but in the summary, Dungeoneering, Heal, Insight, Nature and Perception are off by 1. Since the Math is right, I'll just go ahead and fix them.

Removed comments that no longer apply.

Everything looks good to me now. Neat backstory; I like it :)

I approve Dane for 1st level.

Other than that looks good. Minor things so I approve/

Status: Approved as 1st level character with 0 xp by Lord Sessadore and JoeNotCharles

Status: Approved as a 2nd level character with 1612 xp by renau1g and TwoHeadsBarking.

Status: Approved as a 3rd level character with 3462 xp by renau1g and ScorpiusRisk

Status: Approved as a 5th level character with 5655 xp by renau1g and ScorpiusRisk

Retrieved from "https://l4w.fandom.com/wiki/PC:Dane_(Nebten)?oldid=25922"
Community content is available under CC-BY-SA unless otherwise noted.