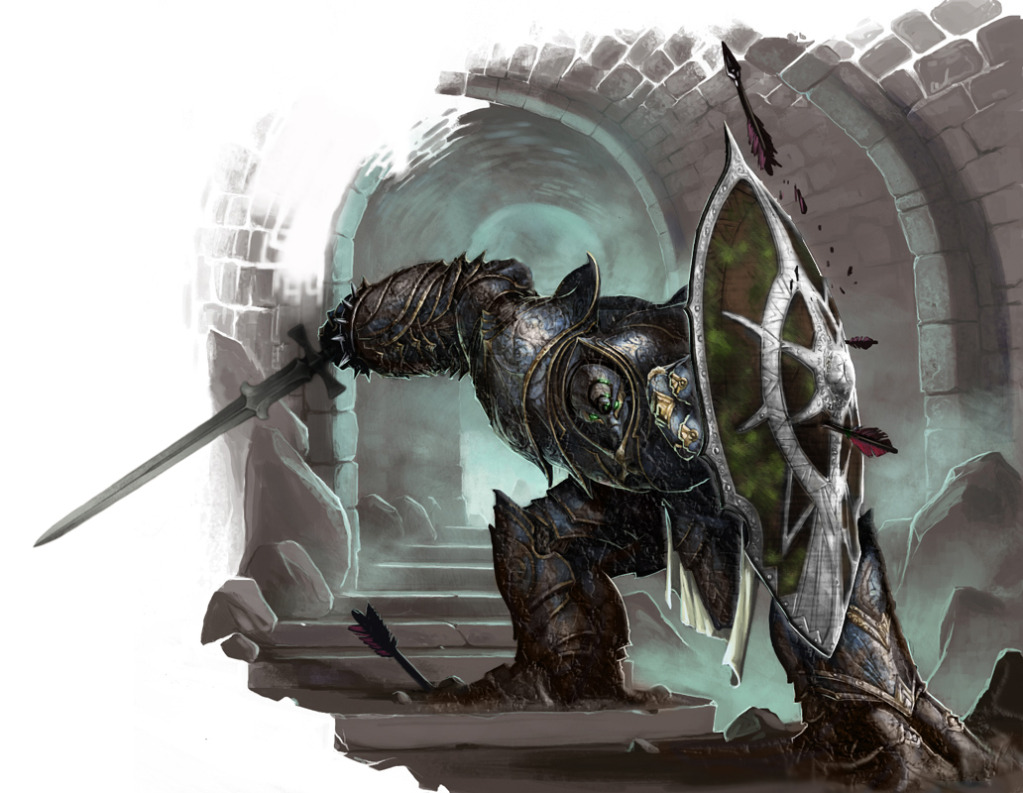 "It has been nearly ten years since I woke from the swirling mists of nothingness. I remember almost nothing of that time... if you can even call it time. I remember the darkness. I remember feeling... nothing. I would rather face a torment of agony for a thousand years than have to endure another five minutes of nothingness. I may have a metal body, but my mind is still mine. I existed before, though I know not who I was. I stepped from out of the forge with a new life to live. I have a new purpose in life and will stop at nothing to accomplish it. If I am dismantled in the process, so be it.

Like most of my kind, I was confused and a little scared when I awoke for the first time. No memories. No family or friends. Only an innate sense of duty, and a deep feeling of purpose. Only problem with that feeling of purpose is that you don't have a concrete goal. Perhaps finding that goal and pursuing it to it's conclusion is the whole point of our existence as Warforged. Perhaps not.

After awaking, I joined the city guard. With only a week of existence, I had more skill with armor and blades than most do after years of service. My blade was comfortable in my large hands and my shield felt as if only an extension of my arm. Yet something was missing. Something inside told me that there was something else I was supposed to be doing. I felt a calling outside of the city. I felt a connection to something deep within the earth. After only six years of serving with the city guard, I turned in my resignation and I left the city. I traveled more miles than I could count or even have a concept for. I walked when I could, rode boats when I had to, and swam when I couldn't find a boat. All told, my journey took me three years of traveling through blistering sands, sheer mountains, and unsettled oceans. My journey taught me a lot about the land and it's creatures. I truly feel that I know more about the natural parts of the world than I do about the people that inhabit it. I plan to change that.

My long journey showed me just how tough I am and what I could accomplish. It also showed me what I truly am. I am an embodiment of nature itself. The earth speaks to me and speaks through me when I am fulfilling my purpose. That purpose is to protect the world from those who would harm it. The world cries out for a champion to defend it. I will heed its' call."

Occupation - Military: (From PHB 2) You served in a military organization, such as an army or a city guard. Were you conscripted, or did you volunteer? What was your rank? How did you leave the service? If you haven't left, describe the circumstances under which you still serve while also adventuring.
Background Benefit: +2 to Endurance

Age: 9 years
Gender: Male
Height: 6'6"
Weight: 300 lbs.
Alignment: Unaligned
Physical Description: Crag is tall, even for most warforged. At six and a half feet tall, he tops the normal charts for his race. Sure there are a few out there that are taller, but not many. Unlike others of his race, however, his outer chassis seems to be made, not from traditional smelted steel or iron, but rather, it seems to be fashioned out of unrefined ore, or that perhaps during the smelting process, rocks of the type commonly found with iron ore were thrown in with the metal. This gives him a rough and almost geologically natural look, dark and dusty, like he were roughly carved out of the side of an iron mine instead of smelted piece by piece. The glowing rune so commonly found on the forehead of a warforged is instead replaced by a series of circular rings made from black volcanic glass and dark green emerald, broken up by swirling shapes in silver.

NOTE:The +5 Class bonus to AC is from Crag's Guardian Might (Earthstrength) class feature, since this template will not calculate his Con Mod as the attribute for AC.
Saving Throw Bonuses +2 bonus against ongoing damage. Better of Die roll or 10 on death saving throws.

Taking advantage of the "redo" rules that allows you to well...redo all of your mechanics one time before (or as) you get to level 2, I have had Crag switch out a couple of powers that I thought weren't working for him. Here are my changes:

Retrieved from "https://l4w.fandom.com/wiki/PC:Crag_(Kalidrev)?oldid=6387"
Community content is available under CC-BY-SA unless otherwise noted.