Whenever Brenwar spends a healing surge, he gains 4 resistance to all damage until the start of his next turn. 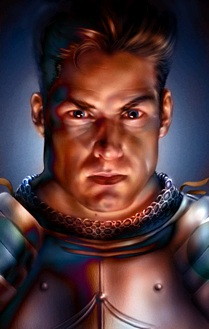 Brenwar was raised in the Temple of Palladys as a holy warrior. He was taught the history of the Imperium and the various religions across the land. As he grew he served the senator Opaten as an able crusader, rooting out darkness that threatened the Imperium. However, some were not pleased with the favoritism Opaten was showing towards the young paladin. They convinced the senator to allow Brenwar a chance to prove himself and lead a band against a cult of demon worshipers. Senator Opaten proceeded to brag to all his senate colleagues about the upcoming successful assault. Brenwar, though inexperienced, didn't think he could fail with his deity's blessings and he had the utmost confidence that it would be a simple mission. Unknown to him the cult was warned of his coming by the very same group that convinced the Senator to allow Brenwar this "honor." Brenwar's band was utterly destroyed and he barely made it out alive. Brenwar lost all favor with Senator Opaten, who became a laughing stock in the senate for sponsoring this embarrassing farce of a mission. Brenwar was sent to Nova Imperia as a guard for the shrine of Palladys. The senator's secretary explained this as a chance to recover his health after his hard fought mission though Brenwar knows the real reason is the senator doesn't want to be reminded of the missions failure. Once the gate failed Brenwar was stranded on Nova Imperia and soon felt his hammer would better serve Palladys by vanquishing evil across the land. With that in mind he has traveled to Daunton and the notorious Hanged Man Tavern to find such adventures...

Age: 28
Gender: Male
Height: 6' 0
Weight: 183 LBs
Alignment: Lawful Good
Appearance: Brenwar is a man of medium build with dark brown hair and stormy grey eyes. He usually wears his plate armor with a dark red cloak over his shoulders. When not in battle he carries his well worn warhammer on his side and his gargantuan tower shield strapped across his back. The shield is a large iron ordeal with a hideous looking medusa's face on the front to strike the fear of Palladys into his enemy. On each side of his warhammer is small silver owl representing Palladys wisdom.
Personality: Brenwar was an eager young man over confident in his abilities and always felt as if nothing bad could ever happen to him. After his terrible battle withe the cult he is much wiser though it came at the cost of seeing his fellow warriors cut down in battle. He now knows that life isn't fair and not every battle can be won. He still gives it his all in every fight, but he isn't as eager for battle as he once was.

Ward of the Temple (+2 Heal Checks)

Changes level 1 -> Level 2: Respec'ed as a charisma based paladin rather than strength paladin.

First, the concerns you noted in your email:
1. Math - Defenses: If you add a line with "|ArmorIsHeavy=yes" to the code for this section your AC will be calculated correctly.
2. Math - Health: Apparently putting your level at 0 subtracts your hp/level value from your initial total ... Anyway, I edited the level field to be 1, so it now shows the correct hp value.

Other little picky things I found:
3. Summary - Ranged Basic Attack: I believe the math section is right with a +3 attack bonus with the sling. I fixed this. I'm not sure if you know or not, but if you use a heavy thrown weapon (like a javelin or throwing hammer) you can use Str for ranged basic attacks with it, if you'd like that better.
4. Summary - Passive Scores: These should be listed as 10+modifier, instead of just the modifier. IE Passive Insight 17, Passive Perception 12.
5. Summary - Armor of Bahamut: Fixed the trigger field (needs to be "|Trigger=" instead of "|Trigger:").
6. Summary - Holy Strike: Fixed the Hit field so it all appeared. Only use "|" at the beginning of a line if it's with the name of a field (such as "|Hit=").
7. Summary - Healing Word: is a burst, not a blast. Not that it matters much. I fixed this.

That's all little nit-picky details. Brenwar looks good, and since none of those are major, I'll give him his first approval. One more and he's fully approved. Thanks for your patience.

Nothing serious, so I approve Brenwar.

The only other thing I noticed was that you are still using the old text for Divine Challenge, which has been updated. Consider this minor enough to approve. MeepoLives 16:55, December 9, 2011 (UTC)

Approval for level 4 by Ozymandias79 and TwoHeadsBarking

Retrieved from "https://l4w.fandom.com/wiki/PC:Brenwar_Holyshield_(Retired,_Public)_(Rapida)?oldid=25629"
Community content is available under CC-BY-SA unless otherwise noted.