Alkas was born on the island of Bacarte and after his mother died during child birth, Alkas' father (Gromt) turned to illicit drugs and hard liquors to soothe the loss. Unfortunately, the cost of such excesses was far too much for a simple dock laborer and that was how Alkas ended up as a slave for an unscrupulous "merchant" of Bacarte, the hobgoblin Torr Vexod, at the young age of 5. For the next few years he worked aboard a ship plying the Shifting Seas, searching for more "crew" and selling the drugs that held his father in shackles. During one of the frequent storms that plagued the waters, Alkas had seen a nearby island and decided after years of abuses to make a break for it. He had been lucky enough not to be manacled, after all there was nowhere to go. He grabbed a few pieces of lumber and leaped into the water. He made it to the island, only barely clinging onto the makeshift flotation device. For years he survived on his own, growing more feral by the day, surviving only by his natural strength and endurance, battling the elements and the beasts that inhabited the small island.

It was 8 years after his arrival when a small vessel from Daunton happened upon the island, the minor noble Alistair Malazar decided to take his lunch on the island after much time at sea. Alkas was curious what these people were doing and approached, his hunger overcoming any caution. The man was a member of the Arcane Cyphers and was more than a bit intigued by Alkas' survival. He took the dwarf under hsi wing, teaching him culture, etiquette, grammar and even attempted to teach him arcane magic, although that ended up with Alkas nearly burning down the family home.

Recently, the noble's daughter, Lily, has taken an interest in Alkas, and one that was shared by the dwarf. Unfortunately, once Alistair caught them carousing together he threw Alkas out of their home and shipped Lily to a distant relative where they couldn't be together. Saddened, the dwarf knew of nothing he could do, when someone suggested he head to the Hanged Man to seek a chance to gain wealth, friends and contacts to help recover his lost love.

Personality:
A nice guy, well spoken, wants to be everyone's friend, avoids "vices" such as alcohol, gambling, drugs as they destroyed his father.
Visual Appearance: Alkas is bald, with an intricately braided long brown beard. Copper ringlets hold the braids in place and the dwarf wears the hide of some animal over his chest, arms bare. A large shield is strapped to his back and a massive hammer sits at his hip. 5 smaller throwing hammers are strapped to his belt 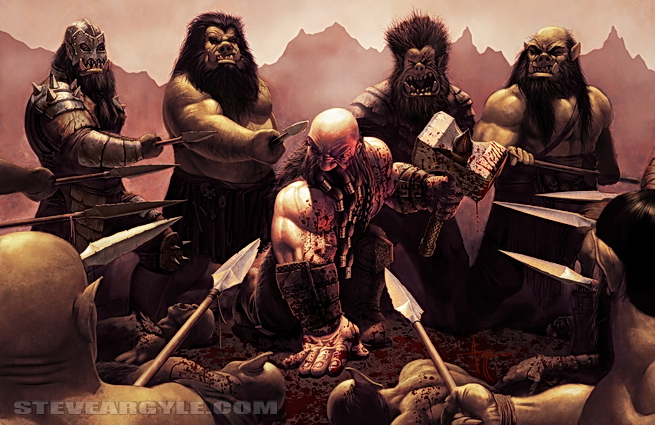 Saving Throw Bonuses +5 vs. Poison; immediate save vs. prone due to attack

Warden's Fury - Trigger: An enemy marked by me makes an attack that doesn't include me as a target Attack: +6 Vs. Fort Hit: 1d10+6 damage, and the target grants combat advantage to me and my allies until the end of my next turn. Warden's Strike- Trigger: An enemy marked by me that is also within 5 squares of me makes an attack not including me as a target Effect: Slide the target 1 square. The target is slowed until the end of its next turn.

I think I fixed it all - Cleverusername

All issues addressed. Approved by Mewness

Approved as 1st level character with 0 xp by Mewness and TwoHeadsBarking.

Retrieved from "https://l4w.fandom.com/wiki/PC:Alkas_Glanrak_(Cleverusername)?oldid=16802"
Community content is available under CC-BY-SA unless otherwise noted.