Leonard was the son of a farmer who wasn't fit for the hard life of the farm, so his father sent him to learn under his uncle tutelage. His uncle was a rich merchant, owning a few ship. When he died, he split his fortune between his son and Leonard. The four boys each inherit a ship to allow themselves to make a fortune on their own.

During five years, Leonard was trading along a trade route between Daunton and Kythira the Living Isle. During all those years, Leonard spent half his time on the ship, where he had plenty of time to entertain the people who paid to travel on his ship. In return, he learned himself the archery skills of the elves, the magic of the eladrins and many more skills of the travelers and adventurers that travelled on his ship.

Lately, during one of his trip, his ship had been attacked. The pirates took all the cargo, capture the crew, sunk the ship and threw Leonard overboard. Only luck allowed him to find lands and return to Daunton, but now he has lost his ship, he hope to find back the money needed to buy a new one by adventuring.


This picture was taken from here. All right are reserved to that artist. 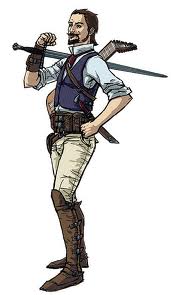 Saving Throw Bonuses none
Resist: none

Anything useful. Here some idea:

Retrieved from "https://l4w.fandom.com/wiki/L4W:PC:Leonard_Doherty_(Velmont)?oldid=20745"
Community content is available under CC-BY-SA unless otherwise noted.