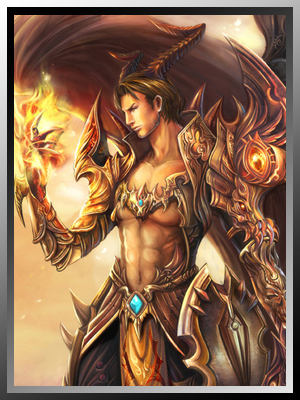 The cunning prince of Hell, burning with the ambition of ascending to godhood

Gehenos, Gehenna, the Nine Hells, Baator... It bears many name but its ruler is known accross the planes by only one: Asmodeus. Charming and handsome as well as powerful and ruthless, he has rallied through might and diplomacy a dominion over which he rules absolutely.

Ambitious, patient and cunning, Amosdeus is an immortal child of the titans, like the other gods. Unlike them, he wasn't rewarded as he deserved when the primoridal war ended. It's all right. You can't respect what is given to you; you only savor what you conquered. One day, he will savor the entire universe.

None. He can be thwarted, he shouldn’t be killable.

Asmodeus wants to become a god. Should he ever become a god, he will then work at becoming the supreme god.

Disciplined: Emphasize the ability of Asmodeus' forces to work together. Sure, we can’t turn our back entirely on classic tales of backstabbing politics in hell, but there are plenty of evil forces who are their own worst enemies. Keep the jockeying for position within the limits of what you’d expect in a well-run army. A disciplined, motivated host of devils working together for their own greater good is much scarier proposition than one more self-destructive group of villains. Asmodeus’ troops should be portrayed as fairly respectful and obedient to their leaders and willing to work with each other to the point where seeing devils turning on each other is a twist in the story and not something you would expect going in. At their best, Asmodeus forces are a meritocracy where the powerful and cunning naturally move up the ranks without the need for useless bloodshed. They use this feature prominently in their propaganda when touting their supremacy.

Calculating: Good tactics and backup plans should be integral to any adventure against devils. They don’t throw resources away. Everyone in the organization has a purpose. Even the weak human cultist is at least good for worshipping Asmodeus and fuelling his godhood quest. As a result, only engage in confrontation when what you stand to gain is greater than what you risk.

Machiavellian: They don’t just conquer, they convince and manipulate. In fact, that’s their first instinct. Remember that they are political creatures capable of generating loyalty through the savant dosage of cruelty and generosity (Good old stick and carrot). Turning an ally of the PCs against them is a good way of demonstrating that. A gift from a devil does NOT need to be poisoned, by the way. As long as they value what they are receiving more than what they are giving, it’s all right with them. After all, if you are satisfied of your dealing with the devils, you will come back for more...

Ambitious: When they show up, always make sure that Asmodeus’ troops are involved in a credible and efficient ploy to amass more power. If they are not doing that, they’ll feel like token monsters for the encounter. They are not roaming vagabonds!

Leadership: Every adventure against Asmodeus Troops should feature prominently a charismatic and rational leader. Every villains should have flaws, but being indecisive or unable to obtain the loyalty of his troops shouldn’t be attached to one of Asmodeus’ henchman.

Pride and overconfidence: This is their achilles' heel. If they were perfectly rational and calculating, they'd be close to invincible. But they do make mistake. As a DM, when deliberately having the enemies make a mistake, try to have it be through underestimating key characters (the PCs, for the most part). When taking an action that isn't perfectly rational and ruthless, try to have it caused by pride (desire for revenge or showing superiority etc.).

Imagine Asmodeus forces as a soulless corporation out to corner the worshipping market and break the monopoly of the gods.

Devils. Lots of devils. Corrupted angels (Asmodeus loves them, it’s a bit of a signature). Various civilized and ambitious humanoid worshippers (Humans, Hobgoblins and Duergars should be heavily represented). The odd powerful sentient worshiper like a dragon.

Use Soldiers over Brutes and features Leaders as much as possible. Avoid easy fights aimed at softening the PCs and focus on a few dangerous encounters.

Retrieved from "https://l4w.fandom.com/wiki/Asmodeus,_the_Prince?oldid=6150"
Community content is available under CC-BY-SA unless otherwise noted.